After two full days of lectures, it was time to wind down. With a few friends(Dom, Satwick, Rob and Karl), we headed down to XinTianDi, in the French Concession area. After a scan of the area, we decided that instead of having western food, we wanted to eat something really local and authentic. Easier said than done.

We approached a local security guard and asked for a noodle shop, but the guys spoke no English. I quickly improvised and mimicked eating noodles with my left hand as a bowl, and my right hand fingers as chopsticks. It seemed to have done the trick. Take the next right, walk down two blocks and take the next left.

The main street lights got dimmer and less touristic as we entered an area that was truly local. A few steps down the road we found the noodle shop. Menu in Chinese, owners spoke no English. The general cleanliness of the place left a lot to be desired. We were almost sure we would catch Gastro. So we sat down for dinner. After all, we saw the guy at work, making fresh noodles on the spot, and we knew we wanted it!

By a stroke of luck, a group of young Chinese locals on the table next to us spoke fluent English, and with their help, we ordered what we would later call “The best noodles in Shanghai” 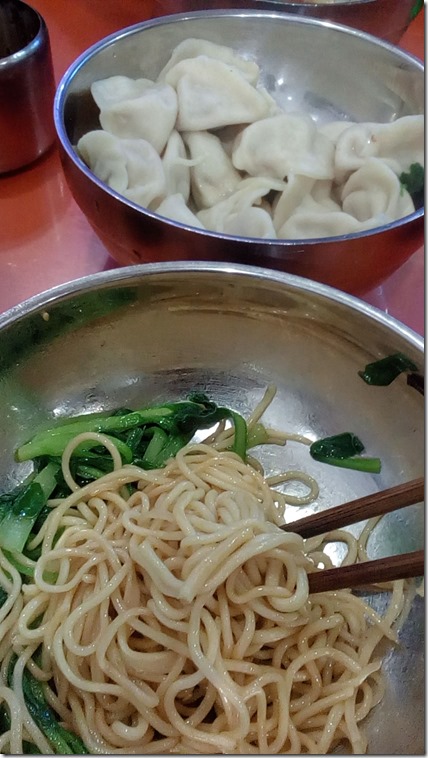 Following the awesome dinner, we headed out looking for a place to chill with a cold drink. And so we started wandering around in neighbourhood we did not know, hoping to stumble on something good. After a solid 30 mins walk, lo and behold, out of all places, we find an Australian pub, run by a bona fide Australian from Brisbane. As we conversed with him, we found out that while he was from Brisbane, his wife is from Canada, with a Chinese background, and they met in Tokyo and their son was born in Shanghai. It was fascinating to find such a broad international mix in such a place.

My biggest disappointment with the couple was that at 11pm, their 5yr old daughter was still out and playing in the pub where people were drinking and smoking, and some girls are lifting their tops while their friends are taking photos. As a parent myself, I wondered about the choices they made for their kids.

On the recommendation of the pub owner, we caught a cab to another pub. Now that place was Dodgy with a capital D. There were Chinese triad members outside the pub, knives in their hip belts. A guy knocked down unconscious on the steps just outside the pub. A bunch of working girls entering and leaving the pub. Common sense dictated that we find somewhere else to go. After all, I had grown to be quite attached to my kidneys and other organs, and really wanted to keep them!