For the past two days, we have been doing some much needed retail therapy. Wanfujing was like Pitt Street Sydney on steroids. Wanfujing road is completely pedestrian, with large malls interconnecting to make them seem even larger that it made Ya Show street market looks like a corner store. 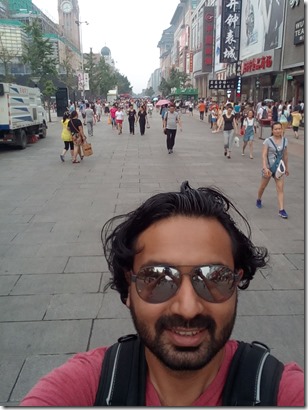 In the evening, getting a cab back to our hotel proved to be quite the challenge. It was then that I could really feel that China, especially Beijing, has no need of foreigners. It was apparent along our journey so far that very few people spoke English. Catching a cab in the late evening (after 11pm) was another story. Cabbies flat out refused to pull over for foreigners. Not for us, and not for the white couple standing just a few metres down the road. The same cab would happily stop and pick up the locals.

I wondered why that was the case. And it dawned on me that it was because they did not want to deal with English speaking customer when they did not speak the language themselves. Certainly, all foreigners had a card with their destination written down in Chinese, but reading that card would be that the taxi driver would need to find his glasses and try to read the small letterings on the card under the faint indoor lights that the car allowed. Why bother when the next customer was a local, and there were plenty of them around waiting for cabs too.

It was time to act as a local. We waited for a cabbie to pull over for a Chinese couple, and quite literally forced our way into the cab when they opened the door. We just stole a cab from a young Chinese couple. The cabbie raised his voice, but when you don’t understand the language, you just smile and tell him your destination. Given up, he reluctantly drove up grumpily and dropped us at our hotel, only to smile when we gave him a generous tip, hoping that next time, he would stop for another foreigner in the hope of a generous tip.

When I told this story to the chief concierge at our hotel, his brushed it off as “normal” and even smart for stealing that cab from the local couple.

I think I’m slowly starting to understand the Chinese.