Yu Yuan Garden is arguably one of the most beautiful gardens that Shanghai has to offer. It derives its name from “Yu” which means Peace and Health in Chinese. The garden dates back to the Ming Dynasty and is over 400 years old. It offers a place of calm and serenity in busy Shanghai, with its calming carp ponds and authentic structures.

But to me, what I noticed most was the people there. From locals to tourists, it felt like everyone’s busy life was left at the gate when they entered the garden. There was no noise and no rush. I felt a calming sensation as people leisurely took a stroll around the place, stopping by for photo opportunities or just to get a reprieve from the unforgiving humidity. The hustle and bustle that existed just outside the gates of the garden suddenly stopped to exist. 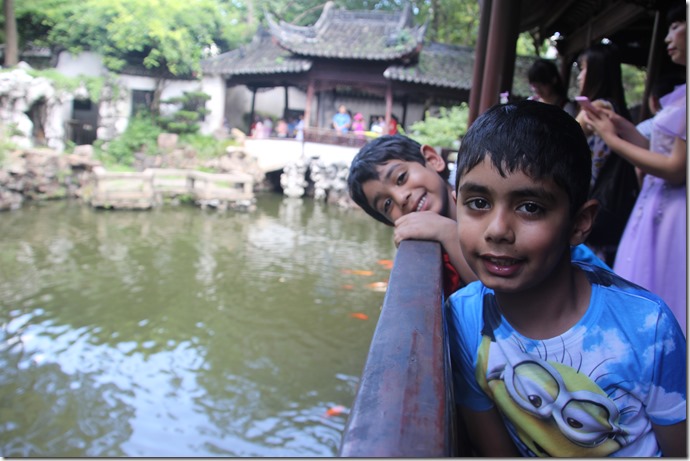 Image: My kids enjoying a well deserved break at one of the impressive koi ponds

After our leisurely stroll, we bought tickets and jumped on the red Hop On Hop Off bus for a ride around Shanghai. This was a great opportunity to see the new development areas for offices (Pudong New Area). It was a remarkable reminder that nothing is too big for China to undertake.

We also went past the new cruise ship passenger terminal, which was, by all accounts, different. It featured modern design, with a futuristic look, with the impressive tall buildings behind it, across the river. They served as a reminder that in China, anything was possible. 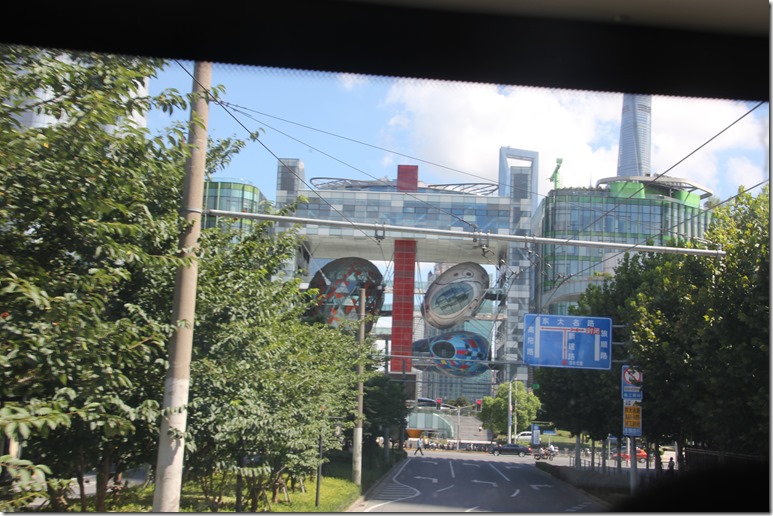 Image: International Passenger Ship Terminal, with tall buildings behind it, from across the river

Eventually, the we hopped off the bus at the famous Nanjing Road. A few days ago, I thought that Wajinfung in Beijing was like Pitt Street on steriods (see http://www.moollan.net/blog/stealing-a-cab/). In comparison, Nanjing Road made Wajinfung look like a quiet street. This part of Nanjing Road is closed off to traffic, and at a leisurely stroll, it takes about an hour to go from one end to the other end of the pedestrian area, without stopping at any shops in between. It has its own little train system that would take you from one end to the other for 5 yuan ($1 AUD). Of course, we stopped at many of the shops and easily spent over 2 hours there.

At dusk, we decided it was time to head to the bund and see it in all its glory, so we readily made our way to the next pickup stop for our Hop On Hop Off bus. And as it would turn out, we literally missed the bus by 1 min.

We spoke to the bus representative at the bus stop, telling him that we want to catch the bus to go to the Bund. He said that the bus will be there in 10 mins, and to walk down a few metres and wait there. Odd. Why should we wait someplace other than the bus stop. But there was 10 mins to wait, and we could always go back to the bus stop, so we thought nothing of it and walked away. 15 mins later, we went back and asked about the bus. Supposedly, it was still 10 mins away. And sure enough, 10 mins later, the bus showed up.

On we went, trying to board, and to our surprise, they stopped us. It was not our bus. Both parties started yelling at each other. I had a ticket that said I could get on any hop on bus, and an attendant that told me I could not. The bus driver casually got off the bus and showed us a sign that said it was a special line for the “night” bus. The argument could have easily been avoided if both parties were able to communicate clearly, but as it was, I did not speak Mandarin, and the bus attendant had limited English. I could tell he was getting frustrated as he was trying as hard as he could be to be helpful but we just could not understand what he was saying.

And so we waited another 20 mins before the bus showed up. By that time, we had been waiting almost an hour for the bus. In hindsight, we should have just caught a cab, but not knowing how long the bus was going to be, and being repeatedly told it was only 10 mins away, we ended up spending almost an hour standing on the kerb waiting for it. To add insult to injury, our destination was only 5 mins drive away in traffic, so no more than 10 mins walk. Again, the communication barrier, it would seem, meant that the bus attendant did not understand where we were headed, otherwise he could have told us to just walk down the road.

When we arrived at the Bund, it was all forgotten and forgiven. The sights that we took on was gobsmacking. I took this photo below with my trusty Canon EOS 60D DSLR set on full Manual. 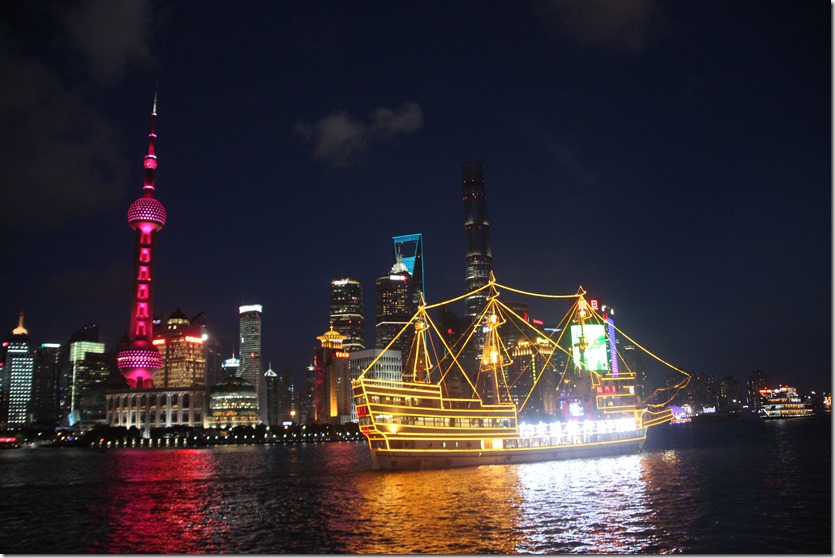 What a sight to end the evening on.